The Threat of a Nuclear Iran

In 2015 Iran agreed to strict controls on its nuclear program. But the U.S. has fully withdrawn from the deal. What comes next?

On July 14, 2015, the five permanent members of the UN Security Council and Germany reached an agreement with Iran. Known as the Joint Comprehensive Plan of Action, the agreement aims to ensure Iran’s nuclear program remains entirely peaceful. But the United States has ended its participation in the hard-won deal and now the future of the agreement is uncertain.

Implications of a U.S. withdrawal

On May 8, 2018, President Trump announces the U.S. will reimpose sanctions on Iran.

Of all the nations involved in the Iran deal, the United States is the only one complaining. Now that the United States has withdrawn, it could trigger one of several potential outcomes—ranging from catastrophic to barely noticeable.

The result would be an isolated and ineffective United States, unable to influence Iran on its own without the backing of allies and partners.

Luckily, the United States is not the only participant in the agreement. The other six countries, including Iran, could decide that it’s in their best interests to continue to follow the terms of the deal. European countries enjoy profitable business relations with Iran and have little incentive to withdraw without a clear violation of the agreement. The same is true of Russia and China.

The result would be an isolated and ineffective United States, unable to influence Iran on its own without the backing of allies and partners.

In the worst-case scenario, the U.S. withdrawal could cause Iran to declare the deal null and void and to ramp up its nuclear weapons program again. If it did, it would probably take only a year or so for it to get back to where it was before the deal took hold.

This worst-case scenario is slowly becoming a reality. Iran declared it would begin producing low enriched uranium above the level of enrichment set by the nuclear deal. On November 4, 2019, Iran announced that it is officially operating dozens of advanced centrifuges that have been banned by the nuclear deal. These advanced centrifuges reduce the one-year estimate it would take for Iran to begin building nuclear weapons. Iranian officials site the US withdrawal and subsequent sanctions as the catalyst for these recent decisions. They have declared that the only way Iran would reverse these actions is if the European powers members to the nuclear deal find a solution that would diminish the impacts of US sanctions.

Thank you
Almost there!
Thanks for your interest in our newsletter! An email is on its way. Please make sure to activate your subscription, by clicking on the confirmation link.

The Iranian nuclear program—including past activities relevant to developing nuclear weapons—has long been a point of contention around the world. Western countries and Iran’s neighbors see the country as a disruptive force in the region. If Iran possessed nuclear weapons, it would be harder to counter its troublesome influence. It could also encourage other nations in the region to build their own bombs—spreading nuclear weapons through the most turbulent region of the world.

Saudi Arabia is of particular concern. It has recently established a nuclear power program with plans to construct 16 reactors at an investment of $80 billion over the next 20-25 years. The country's top Nuclear Official, Hashim bin Abdullah Yamani, says the program is being implemented for "peaceful purposes." A nuclear-armed Iran would be a strong motivation to pursue other purposes. 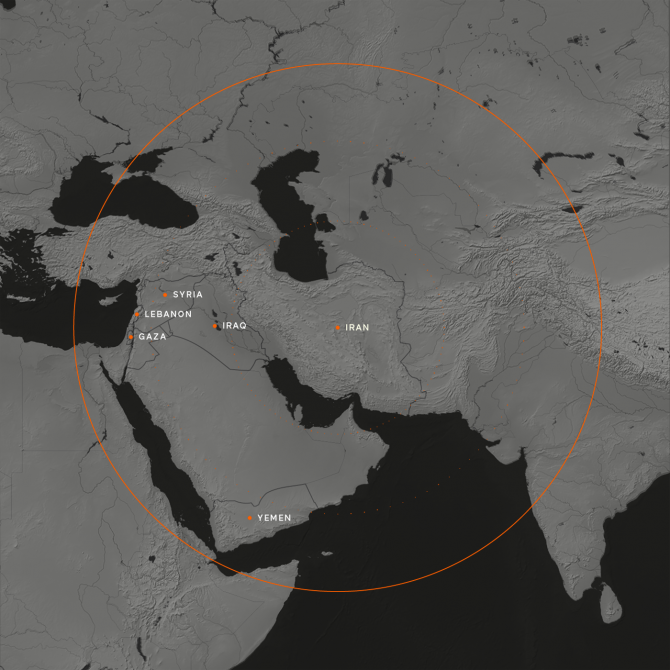 A resource for terrorist and hostile regimes

Iran has provided support to Hamas in the Gaza Strip, Hezbollah in Lebanon, both well-known Iraqi mobilization units (PMUs) linked to worldwide tragedies, the Syrian government of Bashar Assad, and the Houthi rebel movement in Yemen. Iran has also played a role in inflamed Sunni-Shiite tensions in Bahrain and Kuwait.

Iran is a primarily Shiite nation. The country is currently locked in a rivalry with hostile Sunni states, and especially, Saudi Arabia.

Conflict with the West

Since the Iranian Revolution, opposition to the West has been a hallmark of Iran’s policy. Given the country's particular hostility towards the United States and Europe, “Death to America” has become a common slogan of hardline Iranian clerics and militants.

So how did we get here?

Iran’s peaceful nuclear energy program dates back to President Eisenhower’s Atoms for Peace program in the late 1950s. At the time, Iran and the United States had friendly relations and the United States supported the new nuclear program and provided training, infrastructure, and technology.

But in 1979, the Iranian Revolution overthrew the U.S.-backed government of Shah Reza Pahlavi. The regime was replaced with the hostile theocratic government of Ayatollah Khomeini.

Initially, Khomeini refused to develop nuclear weapons. His stance was based on both theological grounds and because nuclear weapons were associated with the West.

His resolve didn’t last. In 1980, Iraq launched an invasion of Iran, setting off a bitter war in which over a million people died. During the conflict, Iraq’s leader Saddam Hussein actively pursued a nuclear weapons program in Iraq—Khomeini followed suit.

In August of 2002, the National Council of Resistance on Iran (NCRI)—an Iranian opposition group based in France—announced the locations of these undeclared facilities to the public. It turned out the facilities had not yet brought nuclear materials on site, so technically there was no violation with the IAEA. Nonetheless, these facilities raised concerns that Iran had a secret nuclear weapons program.

If Iran possessed nuclear weapons, it would be harder to counter its disruptive influence. It could also encourage other nations in the region to build their own bombs—spreading nuclear weapons through the most turbulent region of the world.

This led to several years of on-again, off-again negotiations with European countries and inconclusive investigations by the IAEA. In 2006, Iran was referred to the United Nations Security Council, which issued a resolution requiring it to suspend certain nuclear activities. Iran refused to comply, and the Security Council imposed sanctions.

From there, things got worse. In September 2009, the United States, United Kingdom, and France announced that Iran was building a secret uranium-enrichment facility at Fordow. The United States and the European Union expanded sanctions against Iran to include the banking and oil and gas sectors. The U.S. Congress also authorized the U.S. Treasury to sanction any non-Iranian banks doing business with Iran.

Under the terms of the deal, Iran agreed to measures that would make it difficult—if not impossible—to build a bomb without detection. Iran agreed to get rid of 98% of its enriched uranium. It agreed to redesign its heavy water reactor so that it could not produce significant quantities of weapons-grade plutonium. And it agreed not to produce weapons-grade uranium or plutonium. Iran also agreed to allow the IAEA 24/7 access to monitor its nuclear sites, to ensure full cooperation. Some restrictions expire within 10-25 years, others are permanent.

If the deal does not collapse because of the U.S. withdrawal, it should contain Iran’s nuclear ambitions—and those of its neighbor nations—for the foreseeable future. Since signing the deal, Iran has fully complied with its terms, effectively blocking its pathways to a nuclear weapon. By some estimates, the country once had the ability to build a bomb in two to three months—now it would take at least a year. This extra time could prove critical in helping the international community formulate a response if Iran does show signs of moving towards nuclear weapons production.

Even before the deal was signed, critics complained about the time limits and lack of “anywhere, anytime” access to certain military sites. Opponents often point to the language around ballistic missile tests. In an annex to United Nations Security Council Resolution 2231—which endorsed the Iran deal—the Security Council called on Iran not to undertake any activity related to ballistic missiles that could deliver nuclear weapons. But the language does not prohibit Iran from testing ballistic missiles, and Iran has continued to do just that.

In a departure from the Obama administration’s position, the Trump administration views such tests as a violation of the spirit of the deal.

This photo, taken in 2008 at an undisclosed location in Iran, shows a missile prior to a test firing by the Iranian military. Iran has increased its missile development in recent years.

An Emad ballistic missile on display during a September 2016 military parade near Tehran. This missile has a range of about 1,200 miles.

Opponents of the deal also argue that it ignores the many other threats that Iran poses. Iran is known to support terrorist groups and to inflame sectarian rifts in neighboring states like Iraq and Bahrain. Many fear that without sanctions from the West, Iran will have more resources to use for these purposes. They worry that a wealthier Iran will be a more powerful and dangerous Iran.

But in Iran’s own region, the situation is much more dangerous. Iran is currently locked in a rivalry with hostile Sunni states, and especially with Saudi Arabia. If Iran were to go nuclear, countries like Saudi Arabia might start their own weapons programs or seek stronger U.S. assurances on their security.

The Iran deal is a critical piece in the current structure of global nuclear non-proliferation. Although the deal isn’t perfect, it has checked Iranian nuclear ambitions for now, and it has helped create a climate where Iran’s rivals do not feel pressured to develop their own nuclear weapons programs. If the deal falls apart as a result of the U.S. withdrawal, the world will be a much more dangerous place.

What Happens in a Bomb Blast?